Last year, the UK Charity Commission launched an investigation into the Universal Medicine cult’s UK charity front, the Sound Foundation, located at UM headquarters in Frome, Somerset. Particular scrutiny was given to trustee, Simone Benhayon’s conflicts of interest over her use of Sound Foundation facilities, and as a result, the charity was issued with a compliance plan. Their 2012-13 financial statements are a testament to UM’s fundamental dishonesty – revealing glaring anomalies that should have prompted the Commission to shut the tax exempt sham down.

The Sound Foundation was dormant until UM’s pitch to register their Way of the Livingness religion for tax exempt charity status failed in 2011. Benhayon simply picked up James’ charity and began using it to avoid tax on fundraising to construct his UK business premises, event facility, the Sound Training Centre. Apart from the conference hall and treatment rooms, the facility houses a swimming pool used by Simone Benhayon for her swim school and Esoteric water healing racket.

As we’ve come to expect, the annual financial statements published on the UKCC website whinge about the Commission’s investigation, blame the scrutiny on cyber trolls, and glowingly praise the holiness and integrity of the outfit and its bent trustees. The document doesn’t mention the investigation revealed issues of public benefit and trustee conflicts of interest, and that the Trust was issued with an action plan and deadline for compliance.

Since 31st May 2013, the Trust has been required to dedicate a significant proportion of its volunteered time to responding to the Charity Commission’s follow-up to a malicious complaint arising from a cybertrolling group outside of the UK. The Trust responded with our ‘open book’ approach and the Commission soon confirmed no financial improprieties following a thorough audit visit, The Commission later commented publicly on the Trust’s co-operative approach.

After months of intensive reporting to the Charity Commission, towards the end of 2013 the Trust was able to return its focus to the delivery of its charitable objectives and once again began delivering on its commitment to public benefit charitable activities, as reported below in the report on our plans for the future. Sound Foundation Annual Financial Report 2012-13

Nor did they mention the reshuffle of the Sound Foundation trustees, shedding the invisible Michael Wood, and gaining three more of Serge’s prime yes artists, Stephen Anderson, Dragana Brown and Jane Keep.

Simon Williams is a chartered accountant, and included among the donations in kind is £26,000 worth of ‘professional services’, which I take to mean Simon and Michael Nicholson cooking the books.

Rather than operate to benefit the public, as is required of charites by law, the activities listed in the report are, without exception, marketing and recruitment pitches for Universal Medicine’s commercial operations in the UK. Those activities in 2012-13 were three True Movement sessions aimed at children, (demonizing non cult sport and dance forms comes later); an International Women’s Day promotion of Esoteric Women’s Health Pty Ltd’s commercial products and services; and two Chris James workshops, one of which was aimed at recruiting GPs. The charity’s objectives for 2013-14 were a repeat of the above, with the AMAZINGLY generous donation of a couple of boom boxes and a few chairs to the maternity unit at Frome Community hospital. Recruiting medical professionals helps the cult lure vulnerable patients into UM’s Glorious therapy dependency, and helps the Benhayon parasites to literally get their hands on cancer patients, the aged, and their bequests. The Sound Foundation also went after teachers, similar to the cult’s plan to infiltrate Australian schools, educating children in sycophancy and grooming them for UM’s predatory behaviour.

The charity’s income for 2012-13 was £585,274 (compared with £1,203,892 in 2011-12), and the donations included £300,000 from trustee and chartered accountant, Michael Nicholson, presumably for tax relief. Nicholson also owns accommodation for UM event pilgrims. That total also includes a donation ‘in kind’ of £80,000 worth of swimming activities by trustee, Simone Benhayon – cult leader Serge Benhayon’s step daughter.

*£80,000 worth of swimming activities provided by Simone Benhayon.*

The financial statement devotes a page of apologetics for Simone’s commercial conflict of interest with an appraisal of Simone’s amazing integrity and generosity.

Relationship with Creative Aquatlc, the lessee, of the Sound Training Centre Swimming Pool. The Trust’s expectations of Creative Aquatic’s potential to deliver more than a revenue raising rental business for the Trust to fund further Charitable activities and establish a relationship with and unified commitment to the philosophy of the Sound Foundation facility would be made accessible and affordable, have far been exceeded.

Which of Sergio’s Spherical Stooges wrote that obfuscatory mess?

The Trust has been transparent and responsible about managing the potential of a conflict of interest with Trustee, Ms Benhayon’s business Creative Aquatic as the Leaseholder and manager of the Sound Training Centre Swimming Pool facilities. When the decision was made in 2012, Ms Benhayon was a nationally recognized and awarded swim instructor, having won the UK National Swim Coach of the Year in 2008 and National Fundamentals Swim Coach of the Year in 2011 with an established high profile position in the local area…Blah Blah Blah

Creative Aquatic’s commitment to delivering on their Lease Agreement with the Trust has surpassed all obligations and indeed, all expectations that the Trust insisted upon to ensure that benefit to the general public remained central to the management of the pool and it remained open to use for charitable purposes.

In other words, a tax exempt facility that was supposed to be used for charitable public benefit is used by Simone for commercial purposes. When the Charity Commission began asking questions, the only way to justify all that commercial activity – running scam water healing on top of her busy swim school, was to frame some income as charitable activity, rather than cop to the charge that she was unlawfully rorting the Trust for personal benefit. 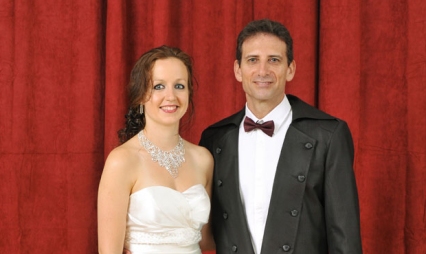 With all that ‘charitable’ activity, where did she find time to run her swim school, and perform all those Esoteric healings, and run the charity and perform her role as company director of UM UK, and EPA UK/EU and serve as an Ascended Master and the reincarnation of Winston Churchill?

The Benhayon family circus performs at the Sound Training Centre for weeks through May to July and again in November. The Benhayons hold around 30 days of publicly advertised events there in the form of workshops and retreats. On top of that is who knows how many sessions and events advertised behind the subscription paywall exclusively to the UM ‘student’ body. Those include True Movement classes and private and group Esoteric healing sessions with Serge, Natalie, Miranda, Michaeal, Curtis, Emmalee and Isabella Benhayon in the days around group events. In addition, Kate Greenaway and other hierarchy parasites run a few event scams of their own.

During the year, Universal Medicine UK Ltd, a company in which the Trustees, Simone Benhayon and Sara Williams are Directors, paid the charity £7,500 for the use of facilities at the Sound Foundation Training Centre.

The statements don’t break that down into how much was paid for treatment room hire, hall hire and catering hire, but considering we can conservatively estimate that the Benhayons occupy the Sound Training Centre for 60 days a year, UM UK are paying less than £125 per day to rake money from pilgrims out of events, healing sessions, merchandise sales, and for donations and volunteer labour as well. The Sound Foundation states it has 40 volunteer staff helping the Benhayons pull money. To get an idea of prices, students pay £90 to £140 per day to pack in to workshops and retreats. Two hour group sessions with Serge are £25 and he runs them twice a day. The rest of the Benhayons run private sessions back to back at £60. In other words, UM UK pays less than £125 per day to use the Sound Foundation facilities to take tens of thousands of pounds per day. The multi million dollar enterprise, of which two charity trustees, Simone Benhayon and Sara Williams, are company directors, is receiving commercial benefit at the expense of the charity’s donors. Moreover, the premises, used for commercial purposes, was constructed using tax exempt donated funds. 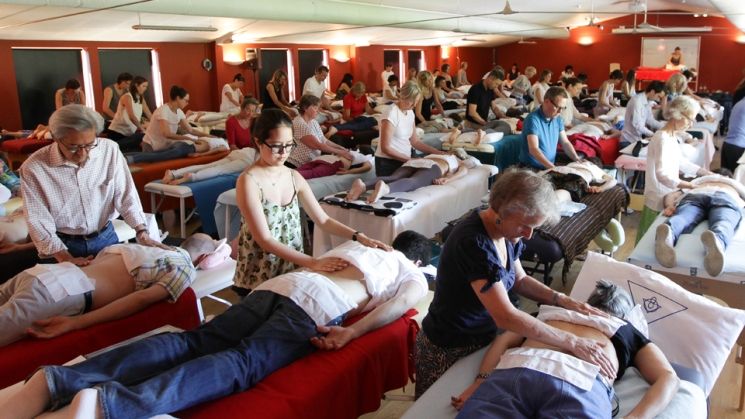 The rest of the year, the Centre is barely used, except by UM’s business associates, Chris James and Sara Williams‘ Spherical Living nonsense. Furthermore, treatment room hire for the year yielded only £9,486, which was supposed to include rooms hired out for the seasonal Benhayon grope fest, as well as year round hire to Esoteric healers, Jonathan Stewart, Fiona Pierce and a bunch of other casual try hards. UKCC scrutiny also saw UM headquarters, The Lighthouse, which houses the Sound Training Centre, remove links to its clinic page and cease advertising UM events. Indicative of all that Esoteric ‘integrity’ they never shut up about.

The UKCC considers the case closed and appears to be satisfied the Sound Foundation is not related to the Universal Medicine business, even though the UM business is clearly commercially benefiting from the construction and use of the facility. The Commission appears to be satisfied that Simone Benhayon could write up £80,000 worth of Esoteric swimming as a charitable donation. It appears satisfied that the Trust’s ‘charitable activities’ are to benefit the public, when they are clearly exclusively benefiting the UM enterprise. As the charity exists to market and accommodate the Universal Medicine business, and recruitment to the UM cult is known to harm followers and their families, it is operating to the detriment of the public.

Our question is, how blatant does the abuse of tax exempt charity status have to be, and how much harm has to be done to members of the public before the UKCC will take meaningful action?