In 2014, Serge Benhayon stated to the NSW HCCC that he has a current Working With Children Certificate. It needs to be taken away from him immediately, for a host of reasons we’ve already documented, including his cavalier attitude to inappropriate touching, the exposure of children to sexually explicit subject matter and the use of covert hypnosis in exorcistic practices at Esoteric events. And then there’s his questionable history with his current wife.

2016 update – Benhayon defamation SLAPP attempting to censor concerns about his behaviour with women and children.

Predatory behaviour and other risks

Serge and Miranda Benhayon regularly have the adolescent daughters of followers as houseguests, sometimes for weeks or months.

Serge’s current wife, Miranda Benhayon, moved into the Benhayon household in her early teens against her mother’s wishes. According to the Sydney Morning Herald, Miranda’s mother has had contact with her once in the past fourteen years. That instance is now one of hundreds of scenarios where the fracture of the person’s family or other close relationships follows directly from Serge Benhayon becoming a pervasive influence in their life.

A young woman who stayed in the Benhayon household at the time Miranda was in her mid teens describes the household and the interpersonal dynamic between Serge and Miranda as creepy, and told us Benhayon would not allow his young houseguests to close the bathroom door when they showered.

I have been alone in a treatment room with Serge Benhayon where I received a sleazy ‘ovarian reading’ I neither needed, wanted or asked for. It occurred after a few sessions of grooming where I developed a false sense of safety. I said repeatedly I didn’t want the reading, and only gave in under considerable pressure and without informed consent. I’m an assertive woman and dread to think how he manipulates women or girls who are less assertive. The ‘reading’ revealed Benhayon’s unwholesome fixation with female victimhood, and focussed exclusively on negative relationships with men, beginning at pre school age.

Serge Benhayon’s lectures feature content inappropriate for children – such as sexual violence, including paedophilia. Esoteric parents insist on taking their children to Universal Medicine events and exposing them to age inappropriate content.

Boys have accidents to shake the energy out of them. If your son comes home and you feel he has been affected by male “pack” energy,  you need to shake the energy out of him either by cutting it verbally  or physically shaking him. It is occasionally best to smack it out of him, so that he avoids an accident. Serge Benhayon, quoted in student notes, Esoteric Development Group 8, May 17, 2008

EDG notes state Natalie Benhayon conducted youth groups in schools where she pressured children as young as 12 years to make disclosures about drug and alcohol use and sex – introducing youngsters to the cult of confession, which aims to reduce personal boundaries and make the subjects more vulnerable to exploitation and indoctrination. Natalie was around nineteen at the time and has zero qualifications. We want to know which schools this took place at, so we can have it investigated. Please contact me if you have any further info.

Universal Medicine has launched scores of defamatory webpages vilifying me and others because we’ve publicly questioned the Benhayons’ sleazy practices and lodged official complaints. On those sites, Benhayons’ minders have defended the practices of inappropriate touching and exploited Serge’s underaged houseguests to publicly vouch he is not a paedophile.

The cult is directly targeting juvenile girls via its Girl to Woman Project and Festival, where girls are plied with toxic occult religious teachings and UM products and services. The Festival in January included a ‘grooming’ tent where little girls were applied with makeup. It was misleading marketed as a child welfare initiative.

Serge Benhayon practices covert hypnosis without informed consent. The most appalling use is in his exorcistic ‘entity’ insertion and removal sessions. A contributor to the Rick Ross Forum gave an account of the entity show being performed on a primary school aged girl. Atrocious. It’s also used in past life regressions where followers are told their reactions are arising from events in past lives as tortured angels or Cathars (persecuted medieval religious minority) and the like. I attended an Esoteric healing workshop in 2005 where adults reached high levels of physical and emotional distress as a result of these practices. The youngest person present was fifteen year old Natalie Benhayon, who I felt was too young to be there seeing the practices were damaging enough to adults. I’ve since learned children are regularly taken to these events where they not only witness adults undergoing cathartic reactions but are subjected to the same. Ex followers have told me they’ve witnessed children in high levels of distress as a result. Anyone who has seen children at events where they are exposed to or subjected to these practices, please report it to the NSW Child Protection Helpline 132 111.

Benhayon delivers toxic parenting advice, including that children should be loved without emotion, that nursing mothers can pass on disease causing energy to their babies via breast milk, and that normal physical activity is ‘racy’. Emotions, sport and music are regarded as evil. Children are forbidden from participating in sport or non Esoteric dance, and their exposure to music is limited to the dross produced by the cult.

Children are taught to fear Benhayon’s invented supernatural enemies – entities, ‘prana’ (which doesn’t have evil connotations in its original use), the Four Lords of Form and the Astral Cult. Followers place healing symbols under children’s pillows and beds to keep the evil entities away.

Parents lack recognition of normal developmental behaviours and subject children to inappropriate practices. Distress among children is disregarded. Benhayon teaches followers to view children as advanced beings with the wisdom of fourth level initiates, unless the child takes a dislike to UM indoctrination, events or healing sessions, in which case they’re regarded as aberrant, and taken, often against their will, to have the prana cleansed out of them. One of our correspondents, Winston, told us about a young boy becoming extremely distressed at being taken for ‘healings’ with a numbskull unqualified Esoteric ‘healer’, who kept crapping on about the child being a reincarnated Cathar.

Benhayon’s Esoteric diet has zero nutritional basis, encourages disordered eating and results in health problems including malnutrition, developmental disorders and dental deterioration. When inflicted on children, it is another form of physical and psychological abuse.

Readers of this site will already be aware of Serge Benhayon’s practice of Deeper Femaleness, touching the genitals of sexual abuse victims and calling it healing, and then teaching that to hundreds of Esoteric students. At the moment we’re only aware of him practicing it on adults, however we do have the workshop manual images of other forms of inappropriate touching as shown in the Esoteric Personal Boundaries post.

At the time of the Esoteric Healing Workshop I attended in 2005, I thought the young girl in the images was Natalie Benhayon aged 14 or 15. She’s wearing the same white hooded sweatshirt Natalie wore to the workshop, however the young girl’s face is dissimilar. If it’s not Natalie in these images, who is it? And how old was she? If anyone can identify that girl and her age in 2004 please contact me. If she was under 16, I’ll remove the image. 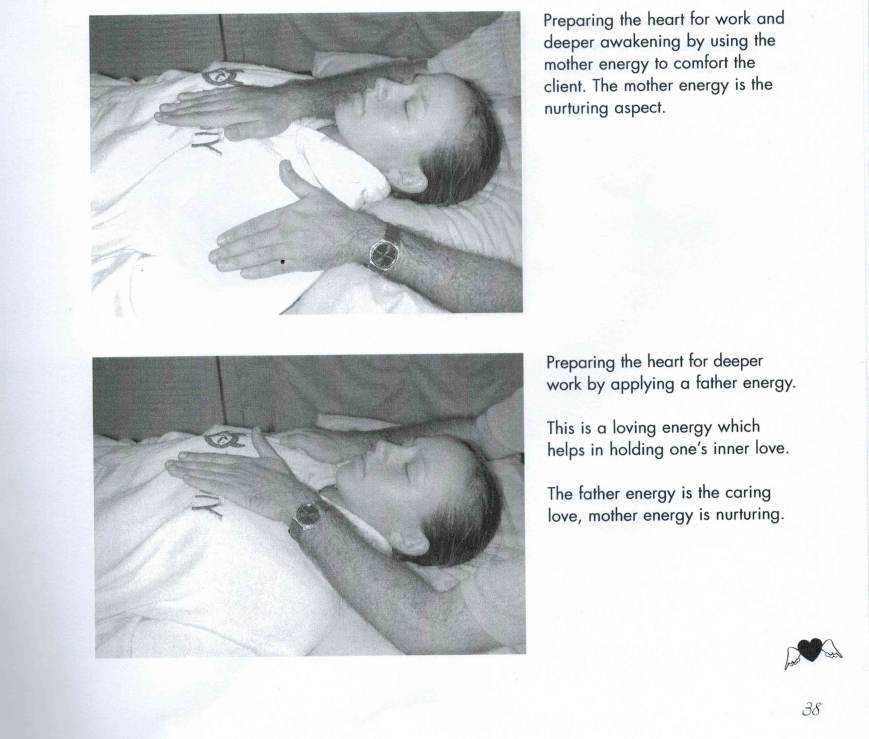 It’s bad enough Serge Benhayon has his hands on her chest, but how does anyone justify his hand pressed to that young girl’s anus? 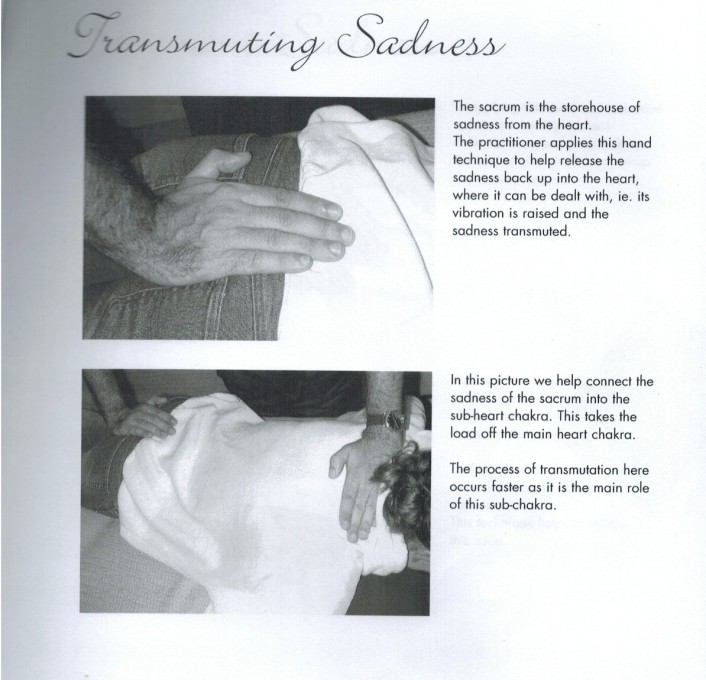 Again, Benhayon’s respect for personal boundaries is nil. It’s inappropriate in dealing with adults. When dealing with children it is utterly unacceptable.

One of our regular readers felt highly uncomfortable when he attended a relationship workshop where Benhayon presented explicit sexual content to an audience including children of all ages. Ex followers tell me children are present at all events and that of all the age groups among minors, teenaged girls are especially highly represented. We have student notes documenting Benhayon’s rants on violent underaged sex, circumcision and deserving rape.

According to the NSW Child Protection Act reportable sexual misconduct includes includes sexual offences such as assault ‘committed against, with or in the presence of a child’. It also includes the following behaviours, many of which match those of Benhayon, as witnessed by readers of this site:

We are aware that the majority of Serge’s followers are decent, well meaning people, however, we are also appalled at the profound level of psychological manipulation that allows adults to not only stand by and watch children being abused, but who are offering their children up for it under the gross misapprehension that the distress and lasting damage it causes is ‘healing’.

The healthcare professionals promoting this abuser have no excuse. Famous paediatrician and author of parenting books, Dr Howard Chilton‘s enabling is particularly reprehensible.

Anyone with any information on the content of this article please contact the NSW Police or the Child Protection Helpline 132 111.

Anyone who has witnessed children undergoing entity insertion or removal, or children brought to states of distress in any UM events or clinics please call the Helpline.

Never leave your child alone in a treatment room with any health practitioner.

On the FACTS blog: Posts on UniMed’s risks to children

The Child Protection Helpline 132 111 is open 24 hours and reports can be made anonymously.