In the past year or two, the nationwide Australian College of Massage merged with commercial religion and Esoteric Healing conglomerate, Universal Medicine to produce Evolve College. It was marriage of mutual benefit, giving Serge Benhayon’s bogus Esoteric modalities the backing of a registered training organization, and ACM’s owners new practitioner courses to market to graduates. One of those is a semester course in worthless chakra-puncture for the price of $8680 (AUD). Chakra-puncture and other Esoteric modalities are the worst of the increasingly profit driven alternative medicine industry – exploiting students and vulnerable patients to fill the pockets of self deified scam artists.

Prior to 2012, when acupuncture became a registered profession, and ‘acupuncturist’ became a protected title, chakra-puncture was called Esoteric acupuncture. Even though its marketers reckon it has nothing to do with Traditional Chinese Medicine, a team of Serge struck acupuncturists assisted in its development. The name was changed to avoid prosecution, and the ex acupuncturists made the switch to avoid the thousands of dollars a year registered practitioners spend on CPD, AHPRA and professional association fees. However, testimonials from UM cult leader Serge Benhayon’s pet cancer patients show his targets don’t comprehend a difference. In 2013 I wrote up Esoteric chakra puncture as an abusive therapy, public health risk and toxic money grab, and lodged a complaint with the inert NSW Health Care Complaints Commission.

The points I made were that chakra-puncture is a sham treatment fleecing cancer patients and other seriously ill people, and a workshop training racket milking money from students. Its inventor, Serge Benhayon, had misleadingly claimed that chakra-puncture is a tradition older than the five thousand year old tradition of acupuncture – even though there is no textual or archeological evidence for it. (Benhayon has also claimed he is the reincarnation of Leonardo da Vinci and Alice Bailey.) The point system and technique is laughably arbitrary, but most disturbingly, there was no evidence the Benhayons were teaching sterile procedure, and they were encouraging students with only a few hours training to go home and start sticking needles in their kids.

In response to my complaint, the HCCC told me Benhayon claims he teaches sterile procedure and his clinic is registered for skin penetration with Lismore city council. When I asked about the risks to children of untrained fools using them as pin cushions, the officer said the HCCC hadn’t asked about that. With regard to the ancient wisdom of Esoteric chakra-puncture, Benhayon stated in writing to the HCCC that he’d cooked up the modality in the past ten years.

The economics of scam therapies

Chakra-puncture is an untested modality devised by an unqualified, ex bankrupt, ex junior tennis coach cum cult leader and practiced by his captive family of earners. The attraction of chakra-puncture practice for the Benhayon rabble is their status as Ascended Masters or high initiates, or whatever the heck Serge markets them as, means their healing services are fully booked. Bottom rung punters climb over each other hoping for a touch of their innermost ‘integrity’. Sergio worked out his progeny were wasted on flogging hands on Esoteric healings to one victim per hour, when they could be mumbling a few phrases of Ageless Wisdom® and tapping a few needles into four pronated ‘investors’ at a time.

The course is taught by his underachieving family and a few mediocre ex acupuncturists, and UM has pedalled the course since 2008, but at no point have they made the course outline, content or fees public.

Evolve College is charging $620 per subject for a six week certificate course, or for 14 subjects taken over 9 weeks for a worthless Diploma of Chakra-puncture. The course will be held in Melbourne, Sydney and Brisbane. The discounted package rate is $3348 for the certificate, $7812/$6944 for the diploma. The difference between the certificate and diploma is meaningless, but Evolve College tells us the Diploma makes graduates ‘professional’. 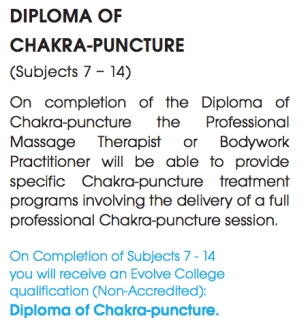 What Evolve College doesn’t mention is that hundreds have taken the UniMed course, with around 500 students counted at a single weekend chakra-puncture cattle call in Lennox Head. But our Naming Names page shows less than a dozen are practicing and earning money for it. None of those are practicing it full time, and they include ex acupuncturists and the Benhayon clan.

In other words, by the time graduates rent clinic space and fork out for equipment while industry overheads are at an all time high, and then try to retain customers in a market already oversupplied with sub-competent therapists, they’ll have little chance of ever recouping those fees.

Evolve doesn’t mention that in the brochure.

Graduates of their next big roll out of rubbish Esoteric Connective Tissue Therapy will encounter the same reality.

No amount of polish will brighten the turds that are Chakra-puncture and Esoteric Connective Tissue Therapy.

I could teach the whole Esoteric healing sham in less than two hours if I removed Sergio’s contrived occult bullshit that comprises the theoretical component. It’s easy, get your mark to lay down, close your eyes, look holy and and rest your hands on them. Literally anywhere will do. Or take some needles, stick them anywhere on a Crohn’s disease or cancer patient, invent some ‘energetic’ jargon to make it sound mystical, and charge them $70. When it does nothing and the customer complains, tell them they need a few thousand more treatments to clear their evil prana, and if they protest, tell them they’re loveless, in pain and haven’t dealt with their issues. I could issue diplomas too.

As I explained in 2013, chakra-puncture is a sick joke – a shameless, dumbed down bastardization of acupuncture.

The ‘points’ are random and their locations so imprecise they are meaningless.

And I can tell you right now, because I am an acupuncturist, the needling shown in the images from the Evolve course brochure will do exactly nothing. 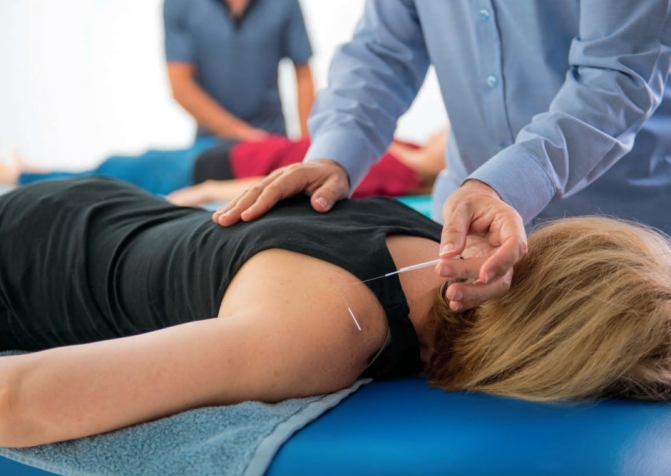 The images confirm to any knowledgeable viewer that chakra-puncture is an out and out scam. Needles placed at that depth at those locations are useless and will have no effect at all.

The brochure doesn’t specify any health benefits for the practice.

But the fact chakra-puncture does nothing for patients is of little interest to Evolve, as long as they can sell those courses.

The course is taught by ex acupuncturists, Michael Benhayon, Neil Ringe and Rebecca Poole, who also happen to be three of the very few chakra-puncturists earning from Esoteric healing. The brochure talks up their extensive acupuncture training and practice, and Neil sell out Ringe’s blurb does some Glorious name dropping of Japanese masters he reckons he studied with during his ‘eight years clinical study in Japan’. So how much time did you spend in actual clinics there, Neil, while you were teaching English full time? And what did those teachers think of you then? And now? Seeing you’re dropping their names to promote a shitty bastardization of the real thing?

It’s also telling that a nine week course in a sham therapy is being taught by qualified acupuncturists, who did a minimum of three years training each.

Apart from that, the course outline is another laugh, featuring a clutch of meaningless subjects hatched from Sergio’s stunted imagination (and ripped off from the likes of Caroline Myss):

And perhaps the story of Serge’s 1998 energetic impress when he heard ‘sweet and beautiful voices’ while sitting on the toilet.

Energetic Anatomy and Physiology 1 An introduction to an energetic understanding and view of the energetic role and relationship all parts of the body and the organs play in the overall function of us as human beings.

Healing with Chakra-puncture 2 Explores in greater detail the powerful application of Chakra-puncture through different types of programs in relation to energetic and physical illness, disease and ailments.

Application of Chakra-puncture through different types of programs in relation to energetic and physical illness, disease and ailments??

What does that mean?

Is Evolve College claiming chakra-puncture can treat illness and disease?

Based on what evidence?

At least the Wilds and Evolve College are honest about one thing. Chakra-puncturists are not accredited, and neither is the course.

Unlike the Esoteric Practitioner’s Association, that misleadingly and unlawfully claims to be UM’s ‘accrediting body’, even though it is not a registered training organization. Yet, Esoteric healers continue to advertise themselves as ‘EPA accredited’, and the accreditation fiction is actively promoted by the cult’s invested health professionals, like rheumatologist, Dr Maxine Szramka.

Interestingly, Evolve has wisely dropped the ‘Esoteric’ prefix from chakra-puncture, because outside the UM cult anything branded ‘esoteric’ is marketing poison.

And what on Arcturus is an ‘evolutionary technique in Bodywork’?

Evolve College Pty Ltd was registered in December 2012. Last year, devout Serge worshippers and owners of the Australian College of Massage, Robert and Deborah Wild’s business partnership with Universal Medicine was made apparent when an ex student contacted us objecting to the College’s restricted musical diet of Chris James’ wailings.

I can’t be bothered forking out money to find out who Evolve’s directors are, but it’s pretty obvious it was a merger. Company director of several Benhayon ventures and part time lawyer, Serryn O’Regan, became ACM CEO last year, and fellow believers/upper rung parasites promptly joined staff. These include general manager, Tania Billing; trainers Michael Benhayon and Dr Danielle Pirera, and then Sally Scott, Leonne Sharkey, Vicky Geary and expert in cyber-bullying, Sarah Davis. Terri-Anne Connors has dropped out for some reason or another – perhaps for getting banned from Wikipedia for vandalism. UMers also provide the testimonials for the chakra-puncture brochure, including staff member, Sally Scott’s husband, man-struation expert, Lee Green.

The partnership is good business for both families. Benhayon needs the backing of a registered training organization to legitimize the survival of his bent healing modalities, while the modalities and the habit forming potential of Esoteric healing services are the basis for a set of lucrative new products ACM can offer to massage graduates. Next they’ll be flogging the initiation scale Serge ripped off from Theosophy.

As yet Evolve is only approved to deliver training and assessment in massage therapy. It’s only a matter of time before Esoteric hogwash courses gain approval too.

While Evolve College is based in Melbourne, the business name ‘Byron Wellbeing Retreat‘ was registered to the same ABN in March last year with a listed postcode of 2481, but cancelled two months later. It suggests the Wilds might have considered investing with the Benhayons in a local compound marketed as a commercial health retreat. Perhaps they still have enough business sense to abandon that idea.

The fact images of the Benhayon family dominate the chakra-puncture course publicity and more new publicity is populated exclusively by UMers shows that Evolve College is the Universal Medicine cult’s new Melbourne hub. The merger could mark the beginning of an all new recruitment push via a legion of massage therapy graduates, or it could spell certain and undignified death for what was once a respectable nationwide training enterprise.

Neil Ringe on the Esoteric difference between acupuncture and chakra-puncture