ABC News Josh Robertson exposes documents showing Sergeant Eric Walsh of South Australia Police led fellow Universal Medicine devotees in a campaign to have me criminally charged. The basis of their complaints? Blogs and social media posts I wrote criticising the group, and particularly the activities of its associated health professionals in promoting a toxic quackery scam.

The report quotes some documents leaked from the Unimed compound showing that UM had an ‘ACORN evidence team’ to ‘assist’ followers in making police reports to the Australian Cybercrime Online Reporting Network (ACORN), a branch of the Australian Federal Police.

As many as possible should be going the full hog on ACORN. Flood Eric’s inbox and let’s get to it. with love, Serge

…go to town on any of the UM FACTS blogs i.e. link them.

…Keep reporting her. It will work.

At the time he was preparing to file his disastrous defamation claim against me. 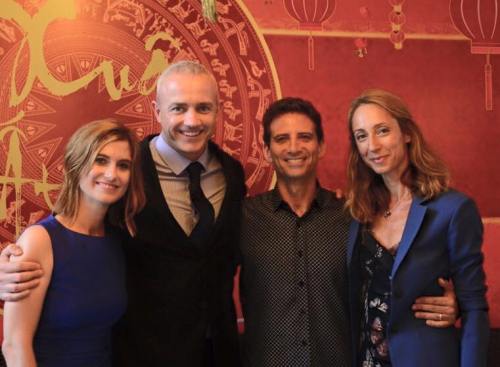 Eric Walsh advised the UM promoters on what to put in their complaints. NSW police then wasted masses of time investigating. There was never any evidence of criminal activity and the complainants, the majority of whom were UM affiliated health professionals, were told so.

But Serge’s special Sons of God wouldn’t take no for an answer. So Eric Walsh sent out a document to at least 40 complainants and their enablers instructing them to put pressure on the investigating detective. He laid out 15 questions to fire at the officer.

He will try to dictate the conversation with you, he will patronise you but he will appear sympathetic. He may tell you what you may want to hear but in conclusion he will just be dismissive.  This is why it is important to have a set of direct questions to put to him – as you will feel yourself almost persuaded by him.

God forbid a professional police officer might almost persuade them with some common sense.

In the document, Walsh dictates another 16 statements guiding complainants in alleging how harassed they feel and suggesting that they demand to be issued with a ‘Crime Number’.

There is and continues to be a real threat of physical assault occurring — and this is directly attributable to [Esther Rockett’s] conduct and actions — and nothing else.

I hope that it’s clear to everyone that there is zero evidence that any of my campaigning to bring UM to account has incited violence or threats of violence.

As a reader pointed out, it’s impossible to buy UM’s propagandists posturing as victims when they have actively participated in or at least condoned misleading conduct, shunning, bullying and all kinds of exploitation for years. UM has made people’s lives hell.

Don’t let him draw you into being a UM student – it has no relevance or bearing on your individual report as you have been a direct target of Esther’s online abuse.

By ‘abuse’ he means challenges, questions, criticism and some hearty irreverence – direct responses to the complainants’ public promotions of a socially harmful and exploitative cult and a ‘healing fraud that harms people’.

An unlikely voice of reason

UM’s in house solicitor, Paula Fletcher, not exactly famous for her impartiality or level headedness, seemed to realise Eric et al had taken things a little too far. She wrote:

While section 474.17 of the Federal Criminal Law Act is used reasonably frequently by police, my research has only found cases where there are out right serious threats of harm usually by way of phone calls, or social media or where a carriage service is used to transmit child pornography etc. This has also been Cameron’s direct experience as a criminal lawyer.

There is certainly scope for this legislation to be used in our circumstances, but my understanding is that it is not being used in this manner, most likely since from a policy point of view  it would open the flood gates to anyone who has been defamed, ridiculed  or insulted to be able to use it and thus clog the criminal courts with such charges.

By all means we should ensure that GS does his job correctly, which it appears he has not, but we also need to be aware that another officer would not necessarliy have come up with a different result.

At the time all of this was going on, one of the complainants, former University of Queensland School of Public Health PhD candidate Christoph Schnelle, was involved with several of the complainants in cooking up farcical ‘research’ to validate UM’s bogus wellbeing claims. Their papers were published in 2017 in a couple of international medical journals, but the authors had not made proper disclosure of their links to UM. Not to UQ or the journals.

Even after the input from Fletcher, Schnelle is very vocal in the correspondence with Walsh and the fellow complainants. He recommends complainants make a misconduct complaint to the Ombudsman about the investigating detective. He goes on and on. This is some of what he wrote.

Tell him why he should look after you. Examples: You are a pillar of the community (explain why), you are a professional whose existence is threatened by a malicious troll, you are frightened, you are a single mother with no money and you need his protection, you have children who feel threatened. Whatever the reason, tell him, make it real and personal so he knows he is letting YOU down.

Ask him why he didn’t interview you. His reply to me was that he couldn’t find a crime. Ask him how he would know that without interviewing you? (The Harassment Act is victim centric – all the evidence is with the victim – no interview, no harassment). It is basic police work to interview the victim.

In other words, who needs evidence? People like me should be jailed because Schnelle and his friends feel a crime has been committed. He adds:

If you read ERs blogs, it is easy to believe they are true, just her methods stink.

Schnelle then suggests they escalate this nonsense by equating the kind of exposure and criticism in this blog with violence, or threats of it.

Either the UM complainants weren’t so far gone as to go through with that, or someone within the system told them to get lost. Nothing was ever served to me.

In response to the first media reports about UM in 2012, Eric wrote devotional blogs about how he’s a cop who’s been admiring Serge since 2003, therefore UM isn’t a cult.

Lately he’s been playing the expert on Quora, sounding off as a ‘detective’ on how to get away with murder, among other things.

Eric’s wife Monya Murch is a counsellor who works with trauma victims. Which makes me wonder how she reconciles that with the court’s findings about her guru’s predatory and exploitative tendencies; her authorship of some of UM’s defamatory articles flaming me and my business; and the cult she’s part of regularly inflicting trauma on those who resist their crap.

She certainly gets a bit touchy on social media. These tweets were posted at the time her husband and pals were trying to get me jailed and sued. When she accuses me of ‘stalking’ she’s accusing me of reading material UM promoters publish on the internet.

Finally, after their guru was found by the Supreme Court to have indecently touched clients, behaved inappropriately with women and children, is sexist, and has an indecent interest in juvenile girls, UM’s ‘real men’ started a men’s group. They acknowledge Benhayon as its inspiration, and lend their portraits to the publicity pics.

Circled in the pic below are several of the police complainants and enablers. We have Eric and Serge in the front rows right; Christoph Schnelle left; ‘Robin Hood’ film director, Otto Bathurst top row right; and UM barrister, Charles Wilson behind Serge.

UM initiated this unfolding creep-fest on the eve of the Benhayon v Rockett trial, and forged ahead with it despite the court’s findings. The majority of that lot are still sucking up to their idol, which you kind of expect from a cult; but not from Meetup which is letting the Brisbane branch use its platform as a recruitment ground – without disclosure of the connection.

The impact on me

Some people have kindly expressed concern for my wellbeing in all of this. I’m fine. I was aware that UM had made police complaints about me. The Mystic Dentist, Rachel Hall started hers in Queensland in 2013 and apparently kept them going. I don’t know how many she made in the end. By September 2015, I was aware UM had made 13 complaints. I was also aware that I had not broken any laws, so I wasn’t worried.

For the defamation case of Benhayon v Rockett I subpoenaed NSW police for copies. They came in handy as evidence to back the imputation that Serge Benhayon had bullied me to try and stop me from exposing his inappropriate conduct with children. It was also evidence of UM’s anti-social behaviours. I gave evidence at the trial that 30 UM promoters, including Serge, had made complaints to the NSW police.

The documents obtained by the ABC don’t acknowledge that by the time Walsh published his instructions, Universal Medicine had been trying to intimidate me for some time. Its psychologists and their associates had tried to have me deregistered from my profession. (They argued that my blogging is evidence of psychosis, sadism and sociopathy, and that makes me unfit to practice.) UM’s mercenary Sons of God had made 150 baseless complaints to the ACCC alleging I’d breached Consumer Law, and had tried to shut my blogs down with bogus defamation, copyright and trademark infringement complaints. When I continued to expose UM regardless, they published over 100 articles making false and defamatory allegations about me and attacking my business. All have been taken down since the Supreme Court jury made its findings.

It won’t come as a surprise that some of the same people who complained about me to AHPRA, the ACCC, Google, Twitter, Facebook and WordPress, and took part in defaming me and trashing my business online, also hassled the police. We’re talking about respectable looking professional people behaving exceedingly irrationally: engaging in the type of organised bullying only the most deluded zealots could sustain.

I proved UM’s defamatory propaganda was false by upholding a defence of truth to 36 serious imputations about cult leader Serge Benhayon and his pseudo-religious community. UM’s whingeing crackpots are obstinate and aggressive because they have so much to hide. They’re still cowering in their password protected compound, bitching and backstabbing because their conspiracies were leaked.

I wasn’t ever going to be intimidated by pathetic people. They’re up to their eyeballs in grubbiness and they’re frightened shitless. Best thing we ever did was out them.

Tell us what you think... Cancel reply